It was a dark and dreary morning in Kelpie Cove. Scott starred as the mist rose from the water, glasslike and deathly still.  He sat in a wooden Adirondack chair sipping his morning coffee, a wool blanket wrapped tightly around his shoulders. He watched the mist from his deck. It overlooked the lake with easy access to the water. Even though it was just after six o’clock, the sun had not yet kissed the morning sky. It didn’t matter though. The sky was clad in clouds, dressed in an amorphous armor that would have inhibited any light from shining through.

Silence enveloped Kelpie Cove. Every now and then a lonely owl would cry out, the haunting sound echoing through the surrounding mountains. Despite the cold, Scott felt a sense of peace in the solitude.

That’s when he heard it. A guttural cry of a child. Scott jumped up from his chair and dropped his coffee cup. Gooseflesh crept up his spine. He tried to listen to the darkness but was deafened by the sound of his pounding heart. Just as he was about to go inside, he heard it again.

Scott was sure he heard the child’s voice coming from the nearby river that flowed away from the lake. He shoved his feet in a pair of rubber rain boots and grabbed a jacket that hung from a nail next to the door. Scott tried to think of what he could gather that wouldn’t take too much time. Luckily he had a couple of items already stored on the deck. Scott pocketed a small retractable knife, some paracord, and a small first aid kit. He grabbed his Cop Cam from the table and attached it to his collar so he a video record of everything he saw.

The frosted grass beneath his feet crunched under his weight. Scott quickened his pace, winding around the shore toward the river. White steamy clouds trailed from his nostrils and mouth as he labored on. Water splashed in the near distance. He heard another scream followed by a horse’s angry whinny. Small, annular waves formed along the shore formed by a disturbance around the curved embankment.

As he made his way past a copse of trees, there was silence. Only Scott’s raspy labored breathing could be heard. He scanned the area in front of him looking for something – anything. The clearing was blanketed in dusky shadows of indigo. But as Scott’s eyes adjusted, he saw a boy precariously perched on the back of a translucent horse. The boy’s eyes were wide open, his body rigid with fear. 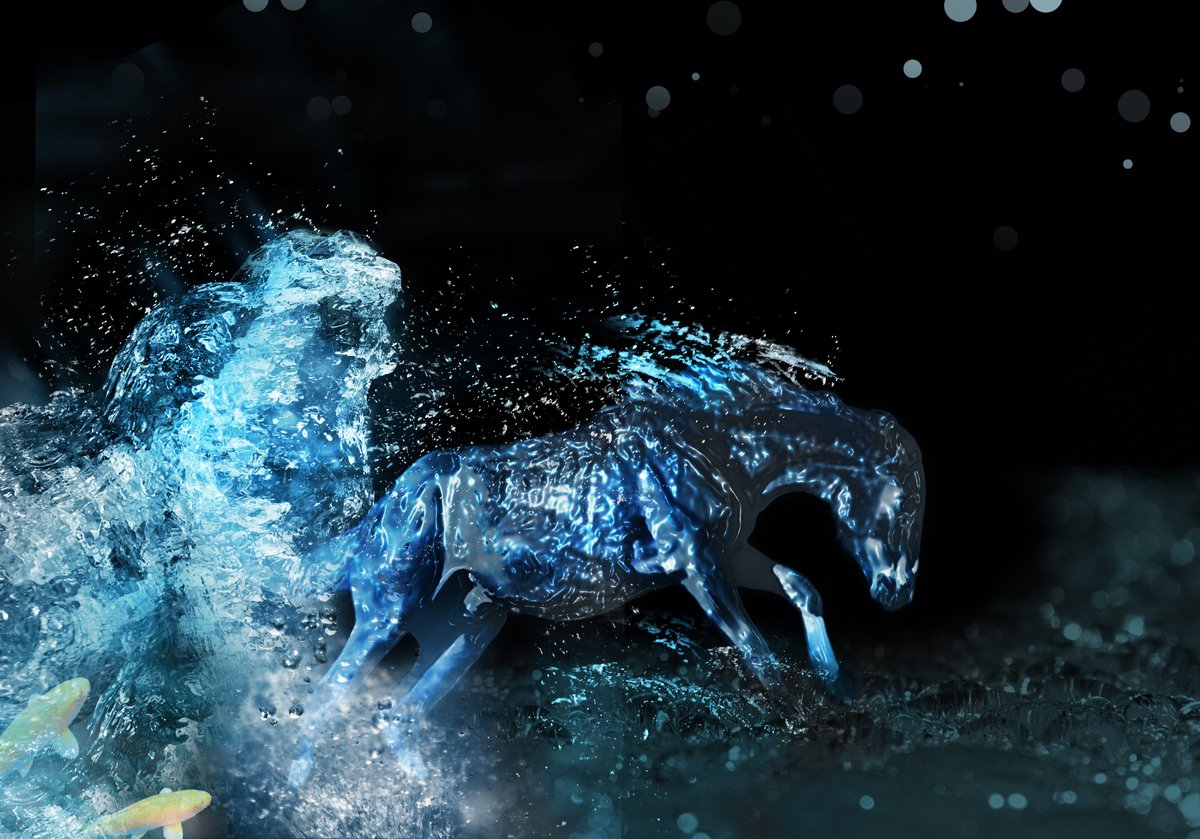 The boy looked at Scott and started whimpering. “I can’t get off the horse,” he whined. The horse bucked up on its back legs, as though to demonstrate the claim.

“It’s okay, son. Just use the bridle to steer the horse away from the water and I’ll help you down,” Scott said as he motioned for the boy and horse to come to him.

“It won’t go the way I want. Please, help me!” the boy sobbed, his shoulders falling up and down with each cry.

The horse became very still. Its body looked like ocean waves churning, full of angry movement. Scott looked in the horse’s crystal-like eyes. While beautiful and mesmerizing at first glance, Scott felt an inexplicable malevolence wash over his body. He knew he had to get the boy off the horse.

Scott worried that the horse would drag the boy into the water and drown him. He heard of the old lore surrounding the lake and river, stories of people going missing, then mysteriously washing up on the shallow riverbed blue and bloated. Police always claimed each victim drowned in an accident, but Scott knew better. There was a reason why the town was called Kelpie Cove. Scott believed that he was standing before a kelpie, which meant that sinister beast would ride the boy into the water and drown him.

Suddenly, the horse charged for the water. It was about twenty yards from the river bank. Scott lurched forward, his feet slow to coordinate at first, but quickly synced in long, swift strides toward the horse and boy. He tore the retractable knife from his pocket. After grabbing at the bridle, Scott finally found purchase which slightly slowed horse’s pace. He deftly cut through the leather bridle and ripped it from the horse’s head.

The horse continued to charge for the water, then suddenly stopped. It whinnied again, its cry pained. Looking back at Scott, the boy cried, “What’s happening?”

It took a step forward then disappeared, leaving only a gelatinous mound in its wake. The boy fell on his backside, splashing in the water. Scott ran to him and helped him up. He removed his jacket and wrapped it around the boy’s shoulders.

“What’s your name,” Scott asked as he guided the boy back to dry land.

“Jack,” the boy muttered. Then, he started crying, soft sobs that gradually thickened with hysteria. Scott bent down on his haunches. Jack buried his face in Scott’s shoulder.

“But, what if it comes back for me?” Jack cried in Scott’s shoulder.

“I don’t think that will happen.”

“No one is going to believe me,” said Jack, quietly.

Scott felt his collar to make sure that the Cop Cam was still there. He held the button to turn it off so he wouldn’t accidentally record over the events that just happened.

“Oh, I think I have a little proof right here,” Scott patted Cop Cam. “Got everything recorded on video. Let’s go to the sheriff’s and contact your parents. I’ll have him upload the video on his computer.”

“Okay,” said Jack. He pushed back from Scott’s shoulder, took his hand, started to walk away from the river.

When Scott and Jack got to the sheriff’s office, Scott explained what had happened and had the deputy on duty transfer the video onto the computer. Cop Cam caught everything.