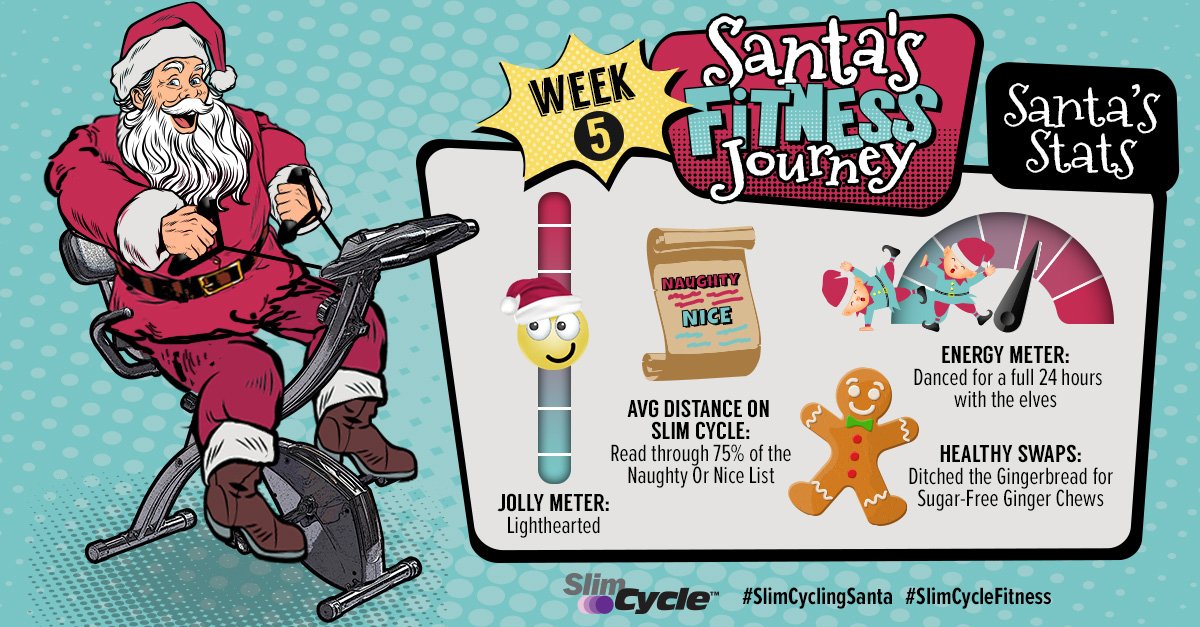 Let me tell ya, Santa’s really gotten a grip on this fitness thing. He’s keeping to his routine and diet without prompting from me. I think he actually likes it! Santa spent a really long time on Slim Cycle yesterday. I don’t know how he did it, but he was simultaneously working his upper body and doing cardio – all while reading through the Naughty Or Nice List. AND he finished 75% of it. As I said, that thing is super-long, so the Big SC was really productive while exercising.

You may not know it, but we elves love to dance. REALLY love to dance. And we dance fast. It’s really hard for Mrs. Claus to keep up with us, so before Santa started working out and dieting, it was impossible for him to join in the fun. Well, I’m proud to report that he’s been in such a lighthearted mood and elevated spirits (which he credits to Mrs. Claus’ good cooking, but we all know it’s the diet and exercise) that he joined us in a Thursday Night 80s Dance Party! What? You didn’t know elves loved 80s new wave? Well, we do. While we were busting a move on the dance floor, I saw Santa mingling amongst the elves taking a break along the outskirts of the room. When there was a pause between songs (I’ll never forget it – Devo’s “Whip It” leading into Missing Persons’ “Destination Unknown”), Santa stormed the dance floor and worked his best Saturday Night Fever moves, even if it was the wrong decade. The best part? He kept up with our high-energy pace, albeit drenched in sweat. That Santa suit is pretty warm.

It’s so hard working through this time of year without consuming some type of sweet treat. But this week, Santa decided to give up gingerbread cookies and started eating sugar-free ginger chews. The Big SC said that those ginger chews help curb his appetite and cleanse his palette. Chewy, spicy, and sweet.

I overheard Santa speaking to Mrs. Claus about swapping out some of the unhealthy ingredients she uses for healthier alternatives, like lard for margarine. So proud of his accomplishments so far!