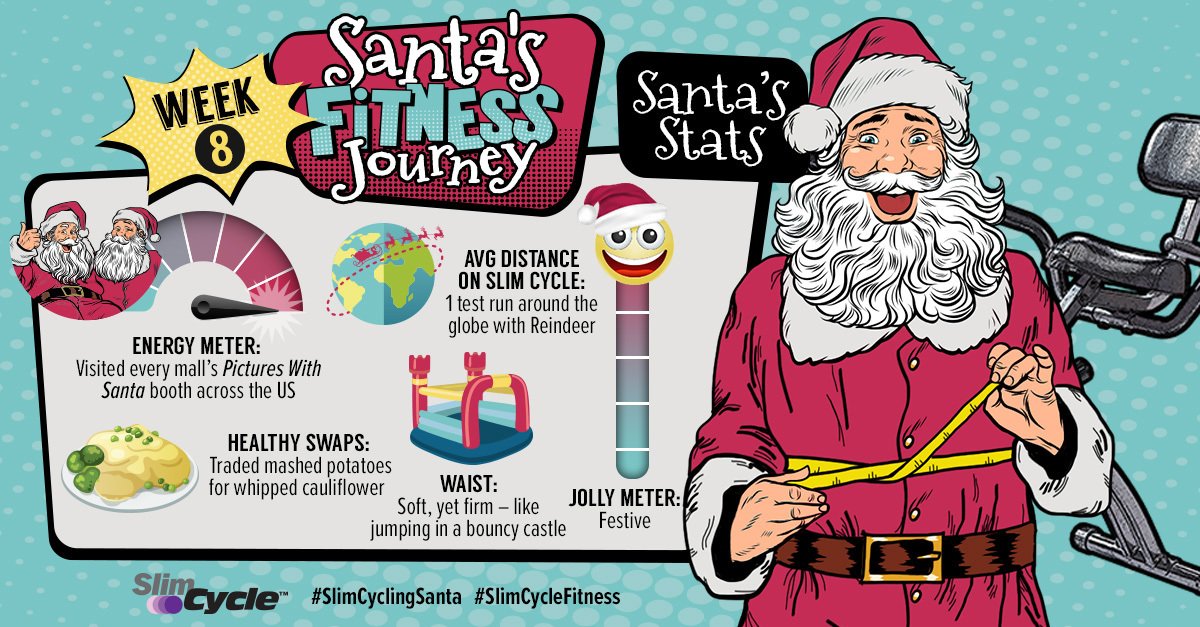 This is it. Santa’s final check-in. The end of his fitness journey using Slim Cycle. While I’m happy that his journey is complete, I still feel a sense of pensiveness, a thoughtful sadness that comes in waves. Soon these feelings will turn nostalgic, and the ache in my heart will yearn for what once was. These past 8 weeks have been filled with so much fun and determination, not only on Santa’s part but everyone at the North Pole.

The Big SC pushed himself beyond his limits this week. His average distance on Slim Cycle is one test-run around the globe. I’m getting lightheaded just thinking about it. That’s a really long distance. Luckily, on the Big Night, Santa will use relativity clouds to help him get the job done. They have something to do with bending time. Pretty much anything is possible with Christmas Spirit (and a team of relative physicist elves). And to you naysayers – some of us elves (not me personally – I’m more of a bard by nature) got some mad science skills and have created things humans have no conception of. CERN? It’s like a Ferris Wheel to us here in the North Pole! Just puttin’ it into perspective. I mean, the Big SC’s sleigh can fly with reindeer. Need I say more? 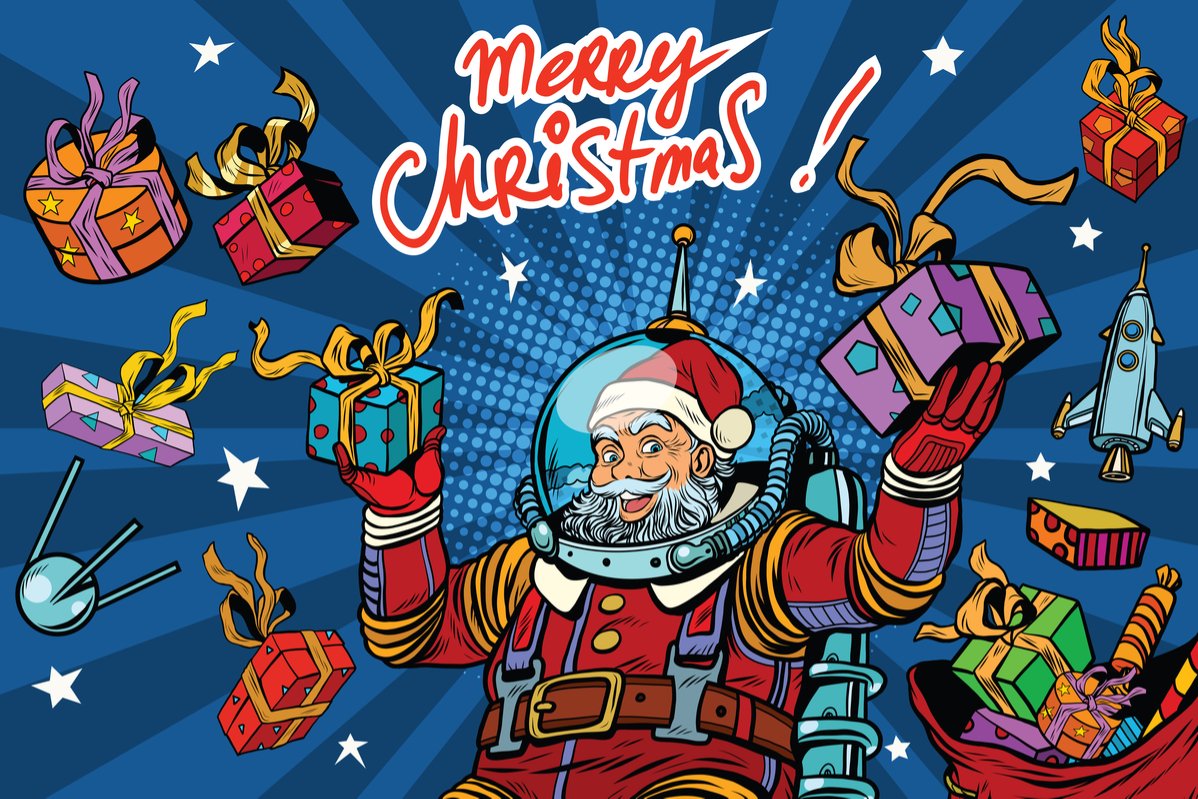 Santa’s been super-duper festive and jolly this week, too. It’s so wonderful to see him is such a festively bright mood. It’s been quite infectious to the elves and the reindeer. Even Dasher, the bulliest of reindeer, has been inclusive to Ruldoph and stopped teasing him about his nose.

Mrs. Claus changed up her mashed potatoes recipe. Well. She completely did away with it, actually. She replaced Santa’s carb-loaded favorite with creamy whipped cauliflower. Most of us couldn’t tell the difference. It was that delicious. I felt no guilt for helping myself to seconds and thirds. After, my tummy didn’t feel heavy. I was actually able to walk around without feeling like I wanted to collapse into a deep slumber. Even Santa was able to get stuff done. Usually, carbs act like a nightcap for the Santa. Next time I’m gonna suggest to Mrs. Claus to make ‘em with caramelized onions and roasted garlic!

I can’t believe how much energy Santa’s had this week. He was hardly here at the North Pole earlier in the week. He felt so energetic, he wanted to surprise every mall in America’s Pictures With Santa station. You know – cause he’s the real deal and all. And the Big SC did it, too! He told us that he gave out presents to the most unfortunate that visited, and apparently it was a gift so big that it gave each individual of hope. Some greedy adults got wind of it (you know how news travels on social media nowadays) and tried posing as folks struck with poverty to capitalize on Santa’s generosity. Santa doesn’t play that. A lot of adults tend to forget the meaning of Christmas, that it’s a season to spread kindness to one another, that it’s not about how many gifts you receive under the tree, but how much caring you have in your heart. Kindness to one another is one of the most precious gifts we can receive. It’s one of the most precious gifts we can give. A simple act of kindness tells another person that you see them, that they exist. Those who are too apathetic or greedy to understand this simple concept are receiving coal this year. Mark my words, I have it on the authority of Santa himself! 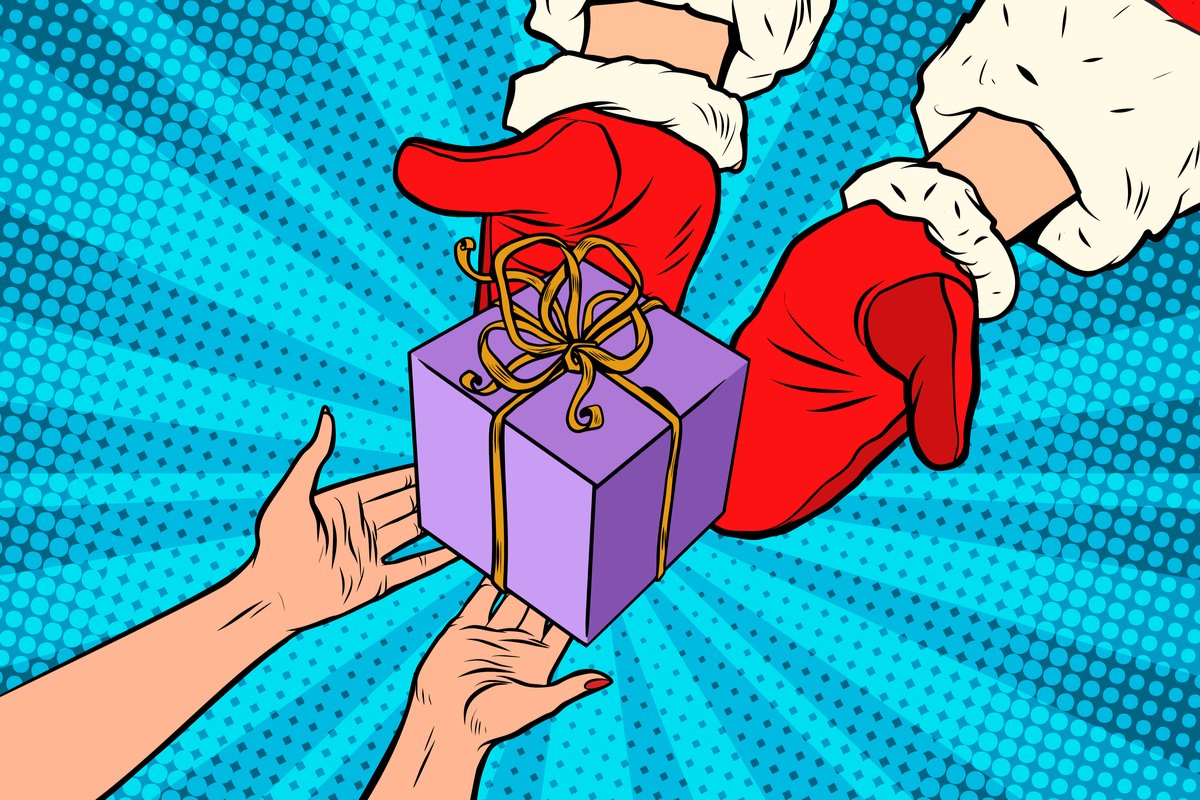 Let’s talk about Santa’s waist. You know you’re wondering. Admit it. Well, I’m happy to report that Santa’s tummy has firmed up since his halfway mark. Even though it is still soft, it’s much firmer underneath that Santa Suit! Now, the Big SC’s stomach has the soft firmness like an inflated bouncy castle. All us elves just want to jump on it! If Santa continues his fitness journey past Christmas, I have a feeling we’ll see even more of a transformation.

Help Santa stay on track next week. Instead of leaving out cookies and milk for Santa (and don’t get me wrong – he loves those cookies!), leave him out some carrot sticks or fruit. He’s got a long journey needs his strength. Plus, the carrot sticks double as a treat for the reindeer!

From all of us at the North Pole, we’re wishing you the warmest and merriest holiday wishes of good cheer and kindness.