History 101: When Were Flashlights Invented?

Gather round, y’all! It’s storytime yet again as we look at the history of flashlights and how they came to be a staple in every person’s home.

Since the dawn of man, we have sought out a way to bring light to the darkness. Candles, torches, oil, and kerosene lamps lit the way for centuries as man needed a way to navigate the night and other dark spaces.

But, these options were at the whim of the ever-fickle and flickering flame, an unruly and often dangerous element that was far from reliable. And so, humankind sought a new way to light up their surroundings: the flashlight.

Join us as we shine a light on the full history of the flashlight.

We Didn’t Start the Fire!

It was always burning since the world’s been turning. Well, at least since 600,000 years ago. That’s when historians believe fire was discovered. Fire changed the way humans existed.

It aided their survival by supplying warmth, cooking for food, and helped to keep away predators. It also had the added impact of encouraging humans to gather!

There are many important discoveries that led up to the invention of the first flashlight, and one cannot overlook fire. Another important discovery of the B.C. era was that of static electricity by the Greeks around 600 B.C. By rubbing fur on amber, Greeks discovered electricity as a natural resource.

Okay, fine. There’s no tequila in this post, but there were some crucial developments in the 1800s that led to the flashlight’s creation!

In 1800, a man by the name of Alessandro Volta created the first modern-day battery. The battery was made of zinc, copper, and vinegar (thanks Romans!) and created a constant flow of electricity. It was mostly used by scientists in controlled environments.

Two years later, Humphry Davy invented the first eclectic light by connecting wires to his battery and a piece of carbon. Unfortunately, it was far too bright and did not last long.

However, his discovery led to the first electric light bulb being invented. While some consider Davy to be the first inventor of the lightbulb, it was Thomas Edison who perfected it in 1879 by creating a bulb that would burn continuously for 13 hours.

EverReady When You Are!

In 1888, Conrad Hubert founded a company that would later be renamed Eveready. If that name sounds familiar, it’s because they are still in business today as one of the biggest suppliers of batteries and flashlights. At the time, they sold batteries and other illuminated novelties.

In 1896, the first dry cell battery was invented by refining a previous model which used liquid electrolytes. The new model opted for an electrolyte paste. This made it so the battery was able to function in any position and wouldn’t break or spill easily.

David Misell, an English inventor, invented the first flashlight and patented it in 1899. It used three D batteries in a tube that was used as the handle of the device. The batteries supplied enough power to create light through an incandescent bulb.

The name “flash” light was a knock on the reliability of the model. These units could not be left on for long because of the zinc-carbon batteries that couldn’t hold an electrical current for long periods of time, thus creating only a “flash” of light.

These early flashlights were nothing more than a novelty at the time. The batteries were inefficient, and the bulbs were dull. Improvements of the batteries and bulbs by Eveready and others started to increase the popularity of flashlights by the second decade of the 1900s. 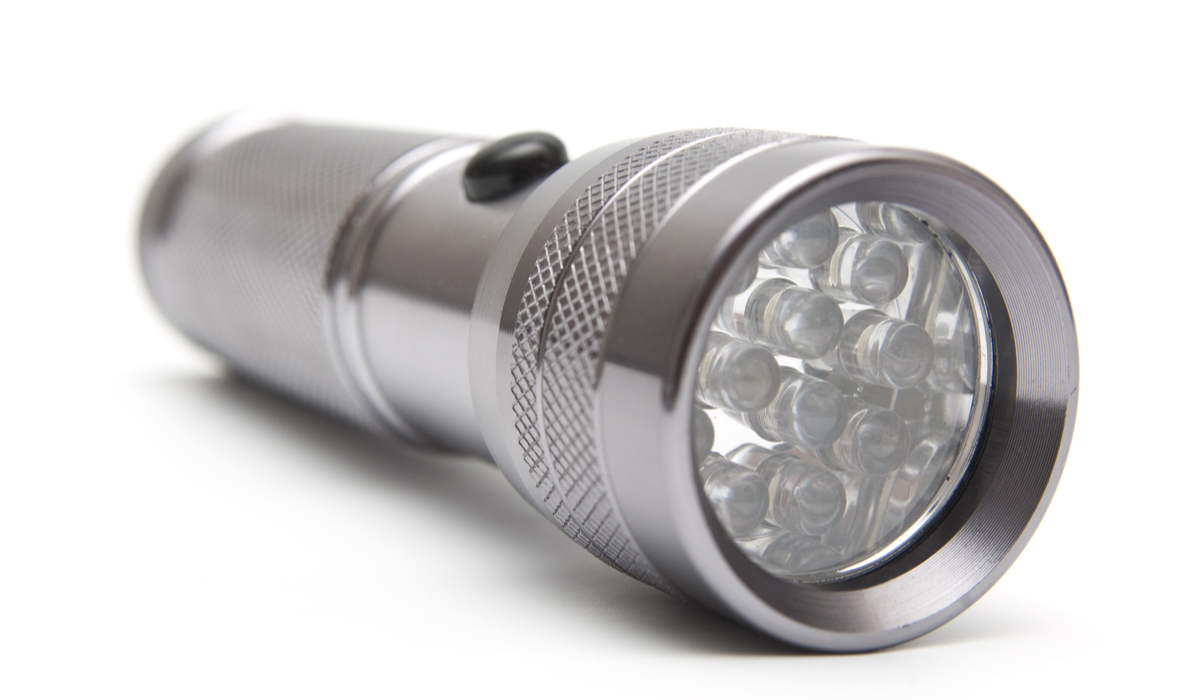 Energized and Ready to Go

Flashlights continued to evolve and become more popular as the 1900s went on. Eveready introduced models with clips for hanging to make them easier to use in emergencies. Black lights were invented and helped at crime scenes and aided in anti-theft protection.

In the 1950s, Eveready’s trademark began to go by the name Energizer (you know, the bunny!). The company is still an industry leader today and owns Eveready holdings.

In 1961, an important but yet to be significant discovery happened when James R. Board and Gary Pittman invented the first Light Emitting Diode. You might know it by its acronym, L.E.D! These weren’t the LED lights as we know them today, though, and were only really sold to IBM for use in their punch-card readers.

Later in the ‘60s, thermoplastic molded flashlights were created. This new advancement allowed companies like Energizer to develop lights in different shapes and sizes. It also made them lighter, cheaper, and more efficient.

Water (proof) You Waiting For?

In 1970, after several years of frankly crushing the flashlight game, Energizer was at it again with the introduction of the first waterproof flashlight. These were a godsend for those who relied on flashlights in emergency situations such as thunderstorms, hurricanes, and floods, or those who cried a lot while using a flashlight to read under the covers!

Things continued to evolve as the ’70s became the 80’s and the ’80s became the 90’s. One major development of note was the creation of the first rechargeable flashlight. It was used for emergency personnel and gave officers and firefighters the ability to help people without having to worry about their flashlights dying.

Popular flashlight company, Mag Instrument, was incorporated in California, and their first flashlight was brought to market a few years later. Pocket-sized flashlights were introduced, much brighter halogen bulbs were put into flashlights, children’s flashlights were sold by Hasbro, and other strides were made in the technology and design of flashlights.

Maybe the biggest advancement in flashlight technology came at the turn of the century when the LED was made usable in flashlights. Like Mag Instrument, the company that introduced the usable LED bulb was based out of California.

Lumileds, as it was named, created the “Luxeon” LED bulb that could be made brighter, more efficient, and smaller than both the incandescent and fluorescent bulbs that were the most prevalent in flashlights at the time.

LED bulbs were the biggest development since the invention of the flashlights itself in terms of everyday use. Incandescent bulbs require around ten watts of power for every lumen (or light emitted per second), while every watt fed into an LED produces around 100 lumens. Essentially, LEDs emit stronger light and last much longer compared to traditional bulbs.

Nowadays, LED lights are the standard. They are dependable and cheap to manufacture and buy. They also produce a vast range of outputs from a wide range of batteries and last longer than any other kind of bulb on the market.

The bulbs do not produce heat, and the quality of light is just better. The light given off by LEDs is white as opposed to the yellow glow of incandescent bulbs, and they do not produce heat. If you are wondering what they look like, you can open your phone and turn on the flashlight app. Yes, LED lights are the same ones that power your phone’s flash!

It seems we have entered a golden age of flashlights. Flashlights continue to evolve and become more useful and effective. You can get flashlights powerful enough to light up your neighborhood or small enough to fit on a keychain; there is truly a flashlight for every occasion!

Some companies have flashlights that double as lighters and can last for hours at a time. Others have created “smart” flashlights that act as a magnet, lamp, and lantern while also being turned into a candle, night light, alarm clock, or even a lava lamp!

Other options like solar-powered flashlights are great for “doomsday” situations if batteries are hard to come by. Ditto for shake flashlights that emit light when they are shaken due to the magnets inside them.

And who knows what will come next! Whatever it is, we will cover it here at Bulbhead. Follow us for more tips, tricks, and blogs.

The Linked History of the Flashlight and the Battery | Thought Co